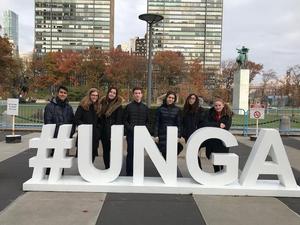 WHHS Scholars at the United Nations

The WHHS Scholars Program is by invitation only to select incoming students, who receive merit scholarships. It offers enrichment opportunities both in and outside of the classroom. The Scholars had a once-in-a-lifetime opportunity when they visited the United Nations during special international times.

Led by an Israeli intern from Israel’s Mission to the UN, Scholars were able to enter the General Assembly, which was celebrating the 30th Anniversary of the UN Convention on the Rights of the Child. They got to hear from both soccer superstar and spokesperson David Beckham, as well as television star, Millie Bobbie Brown. Both serve as UNICEF Goodwill Ambassadors at the UN.

Shahar Azani, a WHHS parent and a former diplomat, now consultant, speaker, author and staunch Israel advocate, along with an Israeli intern from Israel’s Mission to the UN, guided the Scholars through the UN exhibits, with the ever-present reminder that even today, not every UN member nation is a friend of Israel.

This very week, Secretary of State Mike Pompeo, reversing a forty-year American policy, announced that the United States would no longer consider Israeli settlements in the West Bank a violation of international law. This breaking news meant that the UN Security Council would be in session, and it was. For the Scholars, this also meant that they would get to meet and hear about this complex world issue from Daniel Flesch, Senior Advisor to Israel’s Ambassador, Danny Danon. In fact, Mr. Flesch had just left a formal briefing before he joined the WHHS group.
This was truly a school trip of a lifetime, and an historic experience that our Scholars will never forget.
Read More » 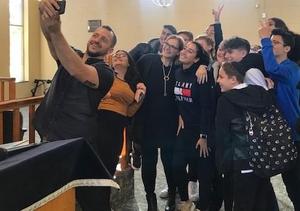 WHHS was privileged to have to Oren Or Biton and Dror Zicherman as guest speakers as part of El-Ami Honor Day. Each former IDF soldier was injured during their respective service. They each presented videos that showed the mission that they were on and how they were injured. However, their focus was not on the circumstances that caused their respective physical injuries, but on the undiagnosed post-traumatic stress disorder that almost destroyed their lives.
Read More » 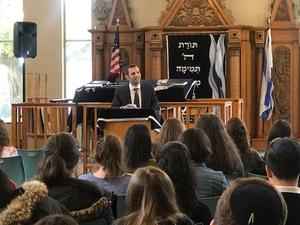 On this Veteran’s Day, WHHS was privileged to hear from Jonathan Gross. His bio is hard to believe: he is a former US Army Captain who served multiple tours of duty in Iraq, an attorney who taught law at West Point, a husband and father who is a Modern Orthodox Jew, and his current position, a paramedic.


Captain Gross related the unexplainable series of events, or what he refers to as “miracles" that led to his journey of faith. These included being granted permission to spend the high holidays in Atlanta, while he was stationed on the Tennessee-Kentucky border awaiting deployment, relying on the advice of a Christian chaplain while serving in the desert of Kuwait, who helped him create a sukkah using a box and a miraculous bush that he saw in the middle of nowhere, and his narrow escape from a rocket explosion on Chanukah. We salute Captain Gross and the rest of the brave men and women who have served or are now serving our country.
Read More » 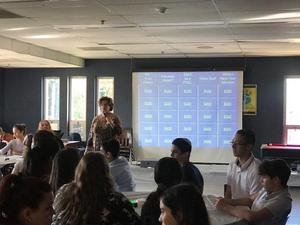 The Truth About Vaping

We had a school-wide program on vaping given by Judith Mezey, who is the head of community services for Student Assistance Services, a Westchester based substance abuse prevention agency.

Using the game Jeopardy as a format, WHHS students competed against one another as they tested their knowledge of vaping generally, vaping products, and the distinction and risk differences between inhaling nicotine or drugs and ingesting them.

Our 2019 Open House provided prospective WHHS families with an opportunity to learn about life at WHHS. Our over-arching theme was the opportunities that a small high school provides. Thanks to our student speakers, our guests learned firsthand that every student at our school has the ability to join athletic and academic teams and clubs, from the start of freshman year. In the academic presentations, they heard about our multiple tracts and the fluidity to move up or down in any subject at any time, even during the current school year.

If you were unable to join us for the Open House, please contact the Admissions’ Office at admissions@whhsny.org to schedule your personal visit.
Read More » 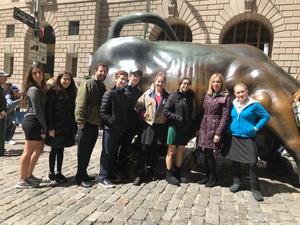 Students in the WHHS Scholars Program learned what is really means to “work on Wall Street.” They first attended a presentation led by a former Wall Street executive, with experience in information technology, compliance, and subsequently day trading. Her informative lecture addressed the diverseness of jobs in the financial sector, as well as the qualities, skills, and education they require. Students were advised to start becoming more cognizant of their own social media footprints, and to consider their personal strengths and weaknesses as they contemplate career options.

The presentation was followed by a walking tour, where students heard about the origins of Wall Street, while standing in front of the historic Stock Exchange building and in view of George Washington’s statute at Federal Hall. And, of course, they stopped to see both the “bull” and “lady” statues, now permanent fixtures in this historic New York City area.
Read More » 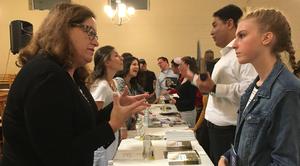 It’s that time of the year. Representatives from seven different colleges and universities shared their professional experience to advise how our students could best prepare for the college admissions’ process. They addressed standardized testing, the importance of both academic success and involvement in extracurricular activities, college interviews and visits, Jewish life in their respective schools, and what they each are looking for as they consider applications.

College admissions’ representatives from a wide array of schools, as well as Israel Gap-Year Programs will be visiting throughout their busy season, holding small meetings with WHHS students and answering questions or concerns that they might have.
Read More »
RSS Feed